Life Is In The Transitions

This inspiring book Life Is In The Transitions by Bruce Feiler, was the chosen text for our first book club meeting which was held in September 2020. 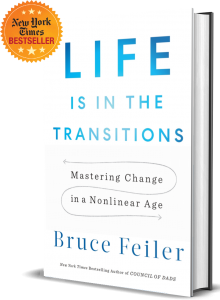 The author coins the term a ‘disruptor’ in life as opposed to a stressor, crisis or problem. This term is more value-neutral and is simply a deviation from daily life.

There are a number of these life disruptors which the author calls ‘The Deck of Disruptors‘ and lists these from his research of 225 life stories, in various categories.

There is an interesting story cited for each one, some fascinating, some humorous and some quite horrific and we agreed in our discussions, that it certainly makes one thankful for the lives we lead.

The total number of disruptors the average adult faces is between thirty and forty according to the author’s research.

Below is an excerpt I want to share directly from the book as this is something close to my heart in regards to longevity:

You might think that modern medicine would make the body less ripe for disruption, yet every advance seems to be met with a host of new worries. Americans today experience puberty earlier, menopause later, and a more drawn-out end of life. We are also facing an unprecedented epidemic of depression, anxiety and suicide.

For the first time since World War 1, American longevity began a prolonged dip in the late 2010s. Six in ten Americans suffer from at least one chronic condition like heart disease, high cholesterol, arthritis or diabetes; four in ten have more than one. A third of us will get cancer, a quarter of us an anxiety disorder, a fifth of us chronic pain.

All of these problems worsen with age, and more of us are old. The percentage of over sixty-five went from 5 per cent in 1920 to 16 per cent today. The number of older people is expected to balloon by as much as 75 per cent by 2050.

The book talks about ‘lifequakes’ which are defined as a forceful burst of change in one’s life that leads to a period of upheaval, transition and renewal.

Lifequakes are massive, messy and often miserable. They come at inconvenient times that usually make them more inconvenient. They aggregate. But they also do something else:

They initiate a period of self-reflection and personal reevaluation.

They set in motion a series of reverberations that lead us to revisit our very identity. They force us to ask what we don’t ask often enough:

What is it that gives me meaning and how does that influence the story of my life?

This leads to life’s ultimate questions:

The ABCs of meaning – A is agency, B is belonging and C is cause. Each of these is discussed in depth along with more real-life stories for each.

There are three stages of transitions: Long Goodbye, Messy Middle and New Beginning.

According to the author, each person is especially good at one of these and especially bad at one. He calls these your transition superpower and transition kryptonite.

His research revealed that the messy middle is the hardest, followed closely by the long goodbye while the new beginning being the easiest across the board.

The life span of a transition is around five years, some take far less and some far longer. Noted is that the issue is not how long transitions take, it’s how long we expect them to take. The burden is on us to adjust our expectations.

Transitions are our healers

So we all know that lifequakes are inevitable, what do we do about them?

The second part of the book titled ‘Reshaping Your Life’ is divided into seven chapters as follows.
These are the tools for navigating life transitions:

Most people instinctively already use many of these tools and the sequence is not particularly important.

Fear comes out top as the greatest emotion people interviewed in this book struggled with. The second top emotion was sadness and the third was shame.

As Steven Pressfield, author and screenwriter said “Fear is good. Fear is an indicator. Fear tells us what we have to do.”

Later in this book the author shares a common equation that people mentally create, it is:

Fear of the Unknown < Fear of the Known This was common in many people interviewed in the book. One person who left a physics job in London for a YouTube comedy band said:

I’d rather live with fear and failure than safety and regret.

Writing their fears down as well as confronting them head-on were both widely used tactics and the morale of the cumulative stories in this book was: Fear is innate; fearlessness can be learned.

Next comes marking it and this step is all about rituals. In periods of shape-shifting, rituals give shape.

Ritual is a catchall term for many different activities such as getting a tattoo, throwing a party, changing name, shaving! These acts give meaning and can foster belonging.

The third tool – shedding, can refer to many things. Shedding a certain mindset, a routine, delusions, dreams. It can involve creating new things such as new attitudes, aptitudes, skills and talents.

The examples in this chapter were fascinating and inspiring. My favorite has to be the person who, after being diagnosed with Parkinson’s, ran seven marathons on seven continents in seven days. I mean wow right!! How is that even logistically possible let alone physically and mentally.

Shedding works just like how animals molt. This biological process of molting is how animals cast off their horns, hair, skin, fur, feathers and more. They do this because they’re growing.

Humans have a similar process when undergoing transitions. We molt habits, convictions and as mentioned above, routines and mindsets.

Shedding involves closing certain chapters in your life so you can open new ones.

Create it, comes next. This can entail learning something new such as dancing, art, cooking, juggling balls. Creativity feeds on chaos. This applies to societies and not just individuals. When we go through disruptions, sprigs of innovation start to appear.

A theme that came through the stories in this book was that when people find themselves in transitions they find comfort in their past. They reignite childhood dreams and fantasies, resuscitate old passions long forgotten.

This chapter ends with the thought that in turning to creativity, we tap into the part of us that is most human: the ability to generate new life.

Sharing and seeking wisdom from others is an important tool for navigating transitions. This tool happens all the time, not just once and not in any particular order.

This is sharing your story with a loved one, a mentor, a stranger, a co-sufferer.

Connecting with others is of huge importance to get through life’s transitions. Human beings like to share. Without doing so, we risk being in a state of loneliness and feeling like we don’t belong anywhere.

This could be why group therapy is so successful and why people will part with their hard-earned cash just for someone to hear what they have to share.

In 44 BCE, the Roman orator Cicero wrote a treatise called How to be a Friend. The point he makes in it is that good friends tell you what you need to hear, not what you want to hear.

Notice any similarities here on what makes a great coach?

Launch it comes next. Unveil your new self. And this step needs to be done publicly which can be scary but is necessary.

Finally comes tell it. Compose a fresh story. According to the book, this is the one we spend the least amount of time talking about and is about updating your personal story.

It’s about writing the next chapter of your life and it ties together all the other parts. I used to be that. Then I went through a life change. Now I am this.

This part finalizes a life transition and telling your personal story is key. This personal story has three major parts: to put some distance between the present and the past, to use positive language, and to nail the ending.

This book ends with the five truths of transitions that the author concluded from all his research in writing the book.

These five truths are:

To conclude the notes from this book, I want to leave you with a final thought quoted from the final chapter:

Each of our lives is a life story project of its own. Learning to make meaning from our life stories may be the most indispensable but least understood skill of our time.

If you're curious to discover your HSP Archetype and find out more about your special gifts, take this free quiz. It only takes a few minutes!

This website uses cookies to improve your experience while you navigate through the website. Out of these cookies, the cookies that are categorized as necessary are stored on your browser as they are essential for the working of basic functionalities of the website. We also use third-party cookies that help us analyze and understand how you use this website. These cookies will be stored in your browser only with your consent. You also have the option to opt-out of these cookies. But opting out of some of these cookies may have an effect on your browsing experience.
Necessary Always Enabled
Necessary cookies are absolutely essential for the website to function properly. This category only includes cookies that ensures basic functionalities and security features of the website. These cookies do not store any personal information.
Non-necessary
Any cookies that may not be particularly necessary for the website to function and is used specifically to collect user personal data via analytics, ads, other embedded contents are termed as non-necessary cookies. It is mandatory to procure user consent prior to running these cookies on your website.
SAVE & ACCEPT